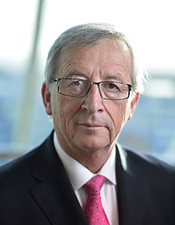 Born in 1954, Jean-Claude Juncker studied law at the University of Strasbourg. He was appointed as deputy minister of labour in his native Luxembourg at the age of 28. He later became minister of labour and minister of finance before serving as prime minister from 1995 to 2013. He was also president of the Eurogroup from 2005-2013. The EPP chose him as their candidate for the presidency of the European Commission on 7 March 2014. Juncker was elected as president of the European Commission on 15 July when 422 MEPs voted in favour of supporting his candidacy.